Mother’s are so special to us. Of course, my mother is no different. 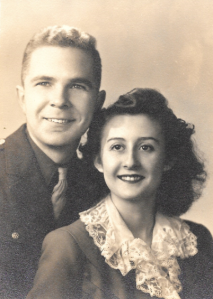 My mother, Dorothy Mae Frey was born on December 30, 1922, in Atlanta, Georgia, the only child of Glenn Thomas Frey and Gracie M. Frey (maiden name Bingham). She married my dad, Everett Wiley Wilson,  on January 21, 1943, in her hometown of Atlanta. They had three children during their marriage. She died on March 5, 1967, in DeKalb, Georgia, at the age of 44. Way to young for all of us kids. I was 12 at the time.

All that I am or ever hope to be, I owe to my angel mother.” ~~Abraham Lincoln

It is true I am a product of my mother’s love. She cared so much for us all. I always felt her love. I owe her so very much. I wish I could thank her in person. Some day I will. I know she believed that.

Her mother was Grace Frey. I don’t remember much about her. She passed away about a month before my mother.

Motherhood: All love begins and ends there.” —Robert Browning

When my parents wed, my dad was defending our freedom during World War II. My mom knew the importance of what he did for us.

A mother is the truest friend we have, when trials heavy and sudden fall upon us; when adversity takes the place of prosperity; when friends desert us; when trouble thickens around us, still will she cling to us, and endeavor by her kind precepts and counsels to dissipate the clouds of darkness, and cause peace to return to our hearts.” ―Washington Irving

My mother always defended me no matter what. She could calm me down. She would sooth the hurts like no other.

If I have done anything in life worth attention, I feel sure that I inherited the disposition from my mother.” —Booker T. Washington

My mother was a woman of hope. We would talk and she would share them with me. Mainly they were hopes for me. She wanted a “better world” and she wanted it for her children. Born in the middle of the great depression. Everyone, including her husband, off at war. Surely there was a better way. She worked hard to make sure we could have it.

My mother is my root, my foundation. She planted the seed that I base my life on, and that is the belief that the ability to achieve starts in your mind.” —Michael Jordan