Here we are. It is “Resurrection Sunday”. I’m celebrating the resurrection of Jesus not bunnies and chocolate candy. That’s just me though.

Jesus died for me and on the third day after He was buried Jesus was raised from the dead to an incorruptible body. Do I believe that? Is it the core of my faith?

Again Jesus said, “Peace be with you! As the Father has sent me, I am sending you.” And with that he breathed on them and said, “Receive the Holy Spirit. If you forgive anyone’s sins, their sins are forgiven; if you do not forgive them, they are not forgiven.” | John 20:19-23

Jesus said to them, “This is what I told you while I was still with you: Everything must be fulfilled that is written about me in the Law of Moses, the Prophets and the Psalms.”

Then he opened their minds so they could understand the Scriptures. He told them, “This is what is written: The Messiah will suffer and rise from the dead on the third day, and repentance for the forgiveness of sins will be preached in his name to all nations, beginning at Jerusalem. You are witnesses of these things. | Luke 24:44-48

But God, being rich in mercy, because of His great love with which He loved us,  even when we were dead in our transgressions, made us alive together with the Messiah (by grace you have been saved), and raised us up with Him, and seated us with Him in the heavenly places in the Messiah Jesus, so that in the ages to come He might show the surpassing riches of His grace in kindness toward us in the Messiah Jesus. | Ephesians 2:4–7 (NASB)

Matthew 16:21 (NASB) — 21 From that time Jesus began to show His disciples that He must go to Jerusalem, and suffer many things from the elders and chief priests and scribes, and be killed, and be raised up on the third day.

Matthew 17:9 (NASB) — 9 As they were coming down from the mountain, Jesus commanded them, saying, “Tell the vision to no one until the Son of Man has risen from the dead.”

Matthew 17:22–23 (NASB) — 22 And while they were gathering together in Galilee, Jesus said to them, “The Son of Man is going to be delivered into the hands of men; 23 and they will kill Him, and He will be raised on the third day.” And they were deeply grieved.

Matthew 20:18–19 (NASB) — 18 “Behold, we are going up to Jerusalem; and the Son of Man will be delivered to the chief priests and scribes, and they will condemn Him to death, 19 and will hand Him over to the Gentiles to mock and scourge and crucify Him, and on the third day He will be raised up.”

John 2:19–22 (NASB) — 19 Jesus answered them, “Destroy this temple, and in three days I will raise it up.” 20 The Jews then said, “It took forty-six years to build this temple, and will You raise it up in three days?” 21 But He was speaking of the temple of His body. 22 So when He was raised from the dead, His disciples remembered that He said this; and they believed the Scripture and the word which Jesus had spoken.

Romans 10:9 (NASB) — 9 that if you confess with your mouth Jesus as Lord, and believe in your heart that God raised Him from the dead, you will be saved.

1 Peter 1:21 (NASB) — 21 who through Him are believers in God, who raised Him from the dead and gave Him glory, so that your faith and hope are in God.

1 Peter 3:21 (NASB) — 21 Corresponding to that, baptism now saves you—not the removal of dirt from the flesh, but an appeal to God for a good conscience—through the resurrection of Jesus the Messiah. 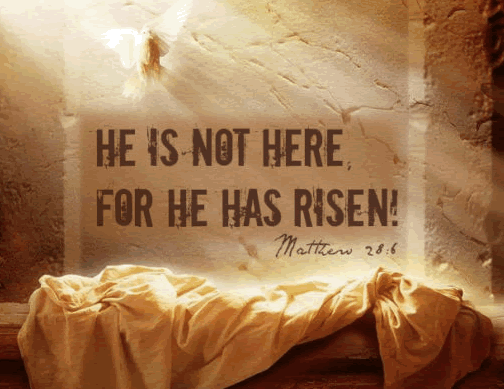