Am I a master at making myself look good? 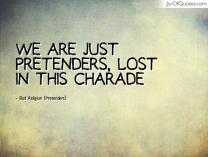 What Jesus has to say to the religious elites (aka Pharisees) and religious people in general is stunning. Jesus is direct. Jesus doesn’t pull any punches.

Am I more concerned about how “I am seen by others” than in changing my mind (aka repenting)? Will I continue the charade? Will I live the holy life Jesus is calling me to?

The religious leaders opposed Jesus the Messiah during his ministry and were among those who brought about his crucifixion. A few, but not many, accepted the Messiah’s teaching and believed in him. Jesus was particularly concerned with their love of money. This is sad but I ought to take note of it. I have been warned.

“You can’t serve both God and the Bank.

“When the religious elites (aka Pharisees), a money-obsessed bunch, heard him say these things, they rolled their eyes, dismissing him as hopelessly out of touch. So Jesus spoke to them: “You are masters at making yourselves look good in front of others, but God knows what’s behind the appearance.”

“What society sees and calls monumental,
God sees through and calls monstrous.
God’s Law and the Prophets climaxed in John;
Now it’s all kingdom of God—the glad news
and compelling invitation to every man and woman.
The sky will disintegrate and the earth dissolve
before a single letter of God’s Law wears out.
Using the legalities of divorce
as a cover for lust is adultery;
Using the legalities of marriage
as a cover for lust is adultery.” | Luke 16:13-18 (The Message Bible)

What does Jesus say about all of this religiosity, elitism and theology? One day, Jesus really let them have it. This is called the seven woes. Listen to Jesus!