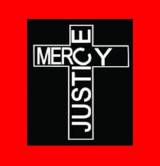 How is God’s justice declared? Justice is a term used for what is right or “as it should be.” Justice is one of God’s attributes and flows out of His holiness. Justice and righteousness are often used synonymously in the Bible. Since righteousness is the quality or character of being right or just, it is another attribute of God and incorporates both His justice and holiness.

Did I mention that God’s justice is a good thing? God is not mean. Justice is required and God is blameless in His approach to justice. Is God fair? Yes. God’s justice is without any partiality. I can trust God completely.

Being just Himself, God calls on me to act justly. It is important. Justice, mercy and faithfulness. Big deals in the world that Jesus is Master of.

“Woe to you, teachers of the law and Pharisees, you hypocrites! You give a tenth of your spices—mint, dill and cumin. But you have neglected the more important matters of the law—justice, mercy and faithfulness. You should have practiced the latter, without neglecting the former.” (Matthew 23:23)