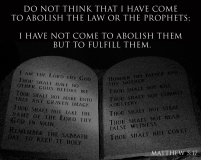 Complete the law and prophets

Jesus continues His manifesto. I have a lot to learn here. Jesus is being clear, as He always is. This isn’t what I was thinking He would say.

Jesus begins this section by telling the disciples not for one moment to imagine that he had come to abolish the law and the prophets, i.e. the whole Old Testament or any part of it. The way in which Jesus phrases this negative statement suggests that some had indeed been thinking the very thought which he now contradicts.

Although his public ministry had so recently begun, already his contemporaries were deeply disturbed by his supposed attitude to the Old Testament. Perhaps the sabbath controversy had flared up thus early, for Mark puts both the sabbath plucking of corn and the sabbath healing of a man’s withered hand before even the appointment of the twelve.

“Do not think that I have come to abolish the Law or the Prophets; I have not come to abolish them but to fulfill them. For truly, I say to you, until heaven and earth pass away, not an iota, not a dot, will pass from the Law until all is accomplished. Therefore whoever relaxes one of the least of these commandments and teaches others to do the same will be called least in the kingdom of heaven, but whoever does them and teaches them will be called great in the kingdom of heaven. For I tell you, unless your righteousness exceeds that of the scribes and Pharisees, you will never enter the kingdom of heaven.” | Matthew 5:17-20

Certainly from the very beginning of his ministry, people had been struck by his authority. ‘What is this?’ they asked. ‘A new teaching! With authority he commands even the unclean spirits, and they obey him’ (Mk. 1:27). It was natural therefore that many were asking what the relation was between his authority and the authority of the law of Moses. It was clear to them that the religious elites (scribes) were submissive to the law and prophets, for they were ‘teachers of the law’.

The religious elites and theologians devoted themselves to its interpretation and claimed for themselves no authority apart from the authorities they quoted.

What was this authority of his? Was he setting himself up as an authority over against the sacred law, the word of God? So it seemed to some. Hence their question, spoken or unspoken, which Jesus now answered unequivocally: Think not that I have come to abolish the law and the prophets.

People are still asking today, though in different ways, about the relation between Jesus and Moses, the New Testament and the Old. Since Jesus grasped the nettle and declared himself plainly on the issue, we should not be shy of following suit.

Jesus had come (notice in passing his awareness that he had come into the world on a mission) neither to abolish the law and the prophets, setting them aside or abrogating them, nor even just to endorse them in a dead and literalistic way, but to fulfil them.

The verb translated ‘to fulfil’ (plērōsai) means literally ‘to fill’ and indicates, as Chrysostom expressed it, ‘that the Messiah’s sayings were no repeal of the former, but a drawing out and filling up of them’.

In order to grasp the far-reaching implications of this, we need to recall that ‘the law and the prophets’, namely the Old Testament, contain various kinds of teaching. The relation of Jesus the Messiah to these differs, but the word ‘fulfilment’ covers them all.

All the great biblical doctrines are there. Yet it was only a partial revelation. Jesus ‘fulfilled’ it all in the sense of bringing it to completion by his person, his teaching and his work.

The Old Testament contains predictive prophecy. Much of it looks forward to the days of the Messiah, and either foretells him in word or foreshadows him in type. Yet this was only anticipation. Jesus ‘fulfilled’ it all in the sense that what was predicted came to pass in him.

The first statement of his public ministry was, ‘Fulfilled is the time …’ (Mk. 1:14). His very words here, I have come, imply the same truth. Again and again he claimed that the Scriptures bore witness to him, and Matthew emphasizes this more than any other evangelist by his repeated formula, ‘All this took place to fulfil what the Master had spoken by the prophet …’

The climax was his death on the cross in which the whole ceremonial system of the Old Testament, both priesthood and sacrifice, found its perfect fulfilment. Then the ceremonies ceased. Yet, as Calvin rightly comments, ‘It was only the use of them that was abolished, for their meaning was more fully confirmed.’ They were but a ‘shadow’ of what was to come; the ‘substance’ belonged to the Messiah.

The Old Testament contains ethical precepts, or the moral law of God. Yet they were often misunderstood and even more often disobeyed. Jesus ‘fulfilled’ them in the first instance by obeying them, for he was ‘born under law’ and was determined (as he had already told John the Baptist) ‘to fulfil all righteousness’.

‘He has in fact nothing to add to the commandments of God,’ wrote Bonhoeffer, ‘except this, that he keeps them.’ He does more than obey them himself; he explains what obedience will involve for his disciples. He rejects the superficial interpretation of the law given by the religious elites (scribes); he himself supplies the true interpretation. His purpose is not to change the law, still less to annul it, but ‘to reveal the full depth of meaning that it was intended to hold’.

So then he ‘fulfils it by declaring the radical demands of the righteousness of God’. This is what he stresses in the manifesto by giving examples.

In every generation there have been those who could not accommodate themselves to the Messiah’s attitude to the law. The famous second-century heretic Marcion, who rewrote the New Testament by eliminating its references to the Old, naturally erased this passage.

Some of his followers went further. They dared even to reverse its meaning by exchanging the verbs so that the sentence then read: ‘I have come not to fulfil the law and the prophets, but to abolish them’!

Their counterparts today seem to be those who have embraced the so-called ‘new morality’, for they declare that the very category of law is abolished for the disciple (though the Messiah said he had not come to abolish it), that no law any longer binds the disciple of Jesus except the law of love, and in fact that the command to love is the only absolute there is.

For the moment it is enough to emphasize that according to this verse (17) the attitude of Jesus to the Old Testament was not one of destruction and of discontinuity, but rather of a constructive, organic continuity. He summed up his position in a single word, not ‘abolition’ but ‘fulfilment’.

The apostle Paul taught very clearly the same truth. His statement that ‘the Messiah is the end of the law’ does not mean that we are now free to disobey it, for the opposite is the case. It means rather that acceptance with God is not through obedience to the law but through faith in the Messiah, and indeed that the law itself bears witness to this good news.

Having stated that his purpose in coming was to fulfil the law, Jesus went on to give the cause and the consequence of this. The cause is the permanence of the law until it is fulfilled (18), and the consequence is the obedience to the law which the citizens of God’s kingdom must give (19, 20).

This is what Jesus has to say about the law he has come to fulfil: Truly I say to you, till heaven and earth pass away, not an iota (which is Greek for yod, the smallest letter of the Hebrew alphabet, almost as small as a comma), not a dot (keraia, a horn, referring probably to one of the tiny hooks or projections which distinguish some Hebrew letters from others), will pass from the law until all is accomplished.

His reference now was only to ‘the law’ rather than to ‘the law and the prophets’ as in the previous verse, but we have no reason to suppose that he was deliberately omitting the prophets; ‘the law’ was a comprehensive term for the total divine revelation of the Old Testament.

None of it will pass away or be discarded, he says, not a single letter or part of a letter, until it has all been fulfilled. And this fulfilment will not be complete until the heaven and the earth themselves pass away. For one day they will pass away in a mighty rebirth of the universe. Then time as we know it will cease, and the written words of God’s law will be needed no longer, for all things in them will have been fulfilled.

The law is as enduring as the universe. The final fulfilment of the one and the new birth of the other will coincide. Both will ‘pass away’ together (parelthē is repeated). Jesus could not have stated more clearly than this his own view of Old Testament Scripture.