I am going to pay attention. Jesus is talking to me. I must learn. This is critical in my life. I don’t want to be a hypocrite.

I must be careful not to shut the door to the country where Jesus is King. I must compel others to go in. Jesus is the WAY!

But woe unto you, religious elites (scribes and Pharisees), hypocrites! For you shut up the kingdom of heaven against men: for you neither go in yourselves, neither suffer you them that are entering to go in. ~Jesus  | Matthew 23:13

When we see the word WOE in the scripture, particularly when Jesus uses it, we know we better pay attention. Jesus has lots to say, all prefaced with WOE!

Here they are charged with shutting heaven against men: in Lu 11:52 they are charged with what was worse, taking away the key—“the key of knowledge”—which means, not the key to open knowledge, but knowledge as the only key to open heaven. A right knowledge of God’s revealed word is eternal life, as our Lord says (Jn 17:3; 5:39); but this they took away from the people, substituting for it their wretched traditions.

The poor in spirit enter the kingdom, but the proud in spirit keep themselves out and even keep others out. The Greek verb indicates people trying to get in who cannot. It is bad enough to keep yourself out of the kingdom, but worse when you stand in the way of others. By teaching man-made traditions instead of God’s truth, they “took away the key of knowledge” and closed the door to salvation (Luke 11:52).

It’s Greek to me!

Those are the only times “woe” and “alas” appear in the New Testament. So let’s look at the meaning of this Greek word, and then see why the translators translated it as “alas” in six places.

The Greek word “ouai” is used in the following three ways:

While these meanings overlap, each one has a somewhat different focus. And in each case it is always the context in which “ouai” is used that shows which specific focus is intended. Most of the time it is used to express a denunciation; i.e. it is used to pronounce someone or something as blameworthy and evil.

Seven times in Matthew 23,  Jesus the Messiah, says these words to the religious leaders and elites of that time, the scribes and the Pharisees. And in all seven cases Jesus identified these religious leaders as hypocrites. In one additional “woe unto you” statement Jesus Christ called those people blind leaders (i.e. “blind guides”).

Can we call a spade a spade, and can we face up to the facts? Let’s look at the first WOE from Jesus.

One lesson here is …

If you knowingly teach things that are false to God’s people, then you will be in the lake of fire, and then it will be “woe unto you”. Hypocrites always know better, but they teach falsehoods anyway. 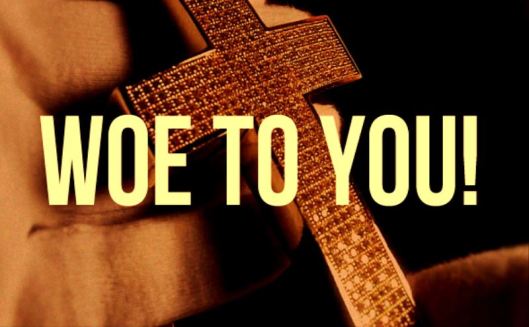 4 thoughts on ““But woe unto you, religious elites (scribes and Pharisees), hypocrites! You shut up the kingdom of heaven against men: for you neither go in yourselves, neither suffer you them that are entering to go in.” ~Jesus”