It is hard to get the issue of being a slave in my mind. In the Greek-speaking world of the first century AD, there was a critical difference between free (eleutheros) and slave (doulos). Each represented a very familiar legal status, with all the social and cultural baggage that implied.

That distinction is rather hard to follow in English translations precisely because outright legal slavery does not exist in Western society, and the concept is absent from our language, except in the loosest metaphorical sense.

Whatever you do, do your work heartily, as for the Master rather than for men, knowing that from the Master you will receive the reward of the inheritance. It is the Master Jesus, the Messiah, whom you are a slave to. | Colossians 3:23–24

Believers as slaves of God — We are owned by God

What makes this such a thorny problem is that in its various forms, doulos is a common word in the New Testament, most prominently in Matthew, Luke, and Revelation. Strong’s Concordance gives 126 instances through the whole Testament, including every occurrence that English commonly renders as “servant,” as in “Well done, thou good and faithful doulos.” The Book of Revelation was revealed to God’s doulos, John. Jude, author of the Epistle, was a doulos of Jesus the Messiah. In the Magnificat, Mary praised God for his mercy towards her, his doula.

When I confess Jesus as Master, I confess myself to be a slave

A slave who is a friend and a son and an heir and a joint-heir and a citizen of that eternal kingdom, and who is loved, having been captured, enslaved. His captor is a despot of love and a master of mercy, and one day He’ll gather us in, Matthew 25:21, and say, “Well done, good and faithful slave.”

In Luke 17, once you understand this, you’ll start to see this unfold as you go through the Scriptures and the good news books and through the rest. You can go through the book of Revelation, there are references to believers in every age up until the last age before the return of the Messiah, and we’re identified as slaves. So it’s a long-lasting identification. Luke 17:7, “Which of you having a slave” … This is because it’s the actual slave in this little illustration; it’s translated correctly … “Which of you having a slave plowing or tending sheep will say to him when he comes in from the field, ‘Come immediately and sit down to eat?’” No, no; would he not say to him, “Prepare something for me to eat, and properly clothe yourself”…Go get cleaned up…“and serve me while I eat and drink and afterward you may eat and drink.” That’s what slaves did, right? They served their masters. He doesn’t thank the slave because he did the things commanded, does he? He’s not like above and beyond the call of duty to be obedient, is it? To do that which pleases your master?

“So you too, when you do all the things which are commanded you, say this,“We’re unworthy slaves, we only did what we should have done.’” Wow! Kind of deals a death-blow to the self-esteem notion, doesn’t it?

You say, “Well, I thought we were free in the Messiah.” You are — you are free to do what your Master desires. 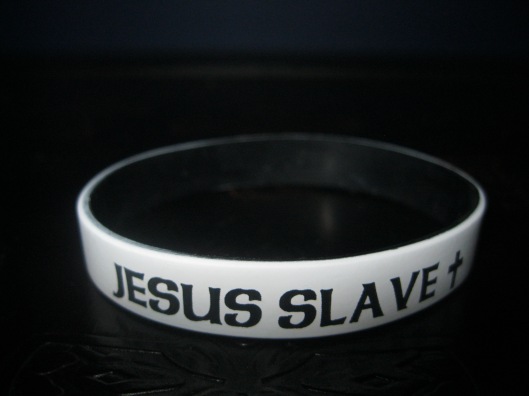 4 thoughts on ““It is the Master Jesus, the Messiah, whom you are a slave to.” ~Apostle Paul”