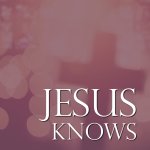 While he was in Jerusalem during the Passover Festival, many believed in his name when they saw the signs he was doing. Jesus, however, would not entrust himself to them, since he knew them all and because he did not need anyone to testify about man; for he himself knew what was in man. | John 2:23-25

While in Jerusalem for the Passover, Jesus performed miracles that are not given in detail in any of the good news books. It must have been these signs that especially attracted Nicodemus. Because of the miracles, many people professed to believe in Him; but Jesus did not accept their profession. No matter what the people themselves said, or others said about them, He did not accept human testimony. Why? Because, being God, He knew what was in each person’s heart and mind.

These people believed in Jesus, but He did not believe in them! They were “unsaved believers”! It was one thing to respond to a miracle but quite something else to commit oneself to Jesus the Messiah and continue in His Word.

John was not discrediting the importance of our Master’s signs, because he wrote his book to record these signs and to encourage his readers to trust Jesus and receive eternal life. However, throughout the book, John makes it clear that it takes more than believing in miracles for a person to be saved. Seeing the signs and believing in them would be a great beginning; in fact, even the disciples started that way and had to grow in their faith.

Throughout the book of John, you see the Jewish people divided over the meaning of these miracle. The same miracles that attracted Nicodemus to Jesus caused some of the other religious leaders to want to kill Him! They even asserted that His miracles were done in the power of Satan! Our Master’s miracles were testimonies, giving evidence of His divine sonship; but they were also tests, exposing the hearts of the people. The same events that opened some eyes only made other eyes that much more blind.

It is important to see that Jesus tied His miracles to the truth of His message. He knew that the human heart is attracted to the sensational. The 5,000 that He fed wanted to make Him King—until He preached a sermon on the Bread of Life, and then they left Him in droves! Grace and truth came by Jesus the Messiah. In grace, Jesus fed the hungry; in truth, He taught the Word. The people wanted the physical food but not the spiritual truth, so they abandoned Him.

“He knew what was in man” is a statement that is proved several times in John’s book. Jesus knew the character of Simon. He knew what Nathanael was like), and He told the Samaritan woman “all things” that she had ever done. He knew that the Jewish leaders did not have God’s love in their hearts, and that one of His disciples was not truly a believer. He saw the repentance in the heart of the adulteress  and the murder in the hearts of His enemies. Several times in the Upper Room message, Jesus revealed to His disciples their own inner feelings and questions.

As you follow our Master’s ministry in John’s book, you see Him moving gradually out of the bright light of popularity and into the dark shadows of rejection. At the beginning, it was easy for people to follow the crowd and watch His miracles. But then, His words began to penetrate hearts, with conviction following; and conviction leads either to conversion or opposition. It is impossible to be neutral. People had to decide, and most of them decided against Him.

People who want His works but not His Word can never share His life. “Seeing is believing” is not the disciple’s approach. First, we believe; then we see. Miracles can only lead us to the Word, and the Word generates saving faith.

Our Master’s accurate knowledge of the human heart is another evidence of His deity, for only God can see the inner person. This brief paragraph prepares us for the important interview with Nicodemus recorded in the next chapter.