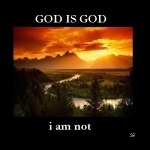 God is God, I am not. God created everything and is in charge. I may not like that but it is true. My choice is to accept it or not. I bow down. God is God.

The God of gods — it’s God! — speaks out, shouts, “Earth!” welcomes the sun in the east, farewells the disappearing sun in the west. From the dazzle of Zion, God blazes into view. Our God makes his entrance, he’s not shy in his coming. Starbursts of fireworks precede him. | Psalm 50:1-3 (The Message Bible)

Psalm 50 functions as a prophetic oracle. God instructs and warns His people about offering sacrifices. The psalm opens with an individual announcing that God has come to speak.

This didactic psalm, written by Asaph, a leading Levite musician who also wrote Psalms 73–83, deals with man’s worship of God and duty to his neighbor, which are in the two portions of the Decalogue (Ten Commandments). Asaph described a scene in the heavenly courtroom in which the Lord will examine His people. Asaph then declared that the Lord had indictments against two sins of His people: formalism in worship and hypocrisy in living. To please God His people must bring sacrifices of thanksgiving from obedient, trusting hearts.

God calls His people to gather, and addresses them directly by warning them that He does not need animal sacrifices. Instead, He prefers loyalty and dependence. He then rebukes the wicked for expressing false loyalty and concludes with a final warning: His people should not forget Him; but they should offer thanksgiving and live in the right way.

The psalmist uses three consecutive Hebrew names for God: el, elohim, and yhwh. Taken together, the names emphasize God’s supremacy as Creator of the earth and God of Israel.

Because el and elohim are both usually translated as “God,” most translations use “Mighty One.” However, the text literally translates as “God, God, Yahweh.” The first “God” (el) refers to God as the supreme deity.

Our God comes God appears with frightening power. Fire and storms accompany Him as He comes to speak.

Theophanies (appearances of God) typically include displays of the power of nature, like storms—showing God’s ability to command these chaotic forces. When God appeared on Mount Sinai, He was accompanied by thunder, lightning, and clouds. When He addressed Job, He spoke from a whirlwind. Fire is also frequently associated with theophanies.

Zion: A reference to the temple mount or Jerusalem in general.

4 thoughts on ““The God of gods — it’s God! — speaks out, shouts, “Earth!” welcomes the sun in the east, farewells the disappearing sun in the west.” ~Asaph”