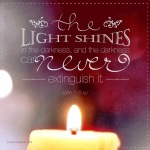 What is Jesus to me? Jesus is life. In Jesus, and only Jesus, I have life. There is no way around it. I can’t, and don’t, want to deny it. It is reality for me. Jesus is life!

In Jesus [him] was life, and that life was the light of men. That light shines in the darkness, and yet the darkness did not overcome it.

The true light that gives light to everyone, was coming into the world.

Life is a key theme in John’s good news book; it is used thirty-six times. What are the essentials for human life? There are at least four: light (if the sun went out, everything would die), air, water, and food. Jesus is all of these!

Jesus is the Light of life and the Light of the world. He is the “Sun of righteousness”. By His Holy Spirit, He gives us the “breath of life”, as well as the Water of life. Finally, Jesus is the Living Bread of Life that came down from heaven. He not only has life and gives life, but He is life.

Light and darkness are recurring themes in John’s good news book. God is light while Satan is “the power of darkness”. People love either the light or the darkness, and this love controls their actions. Those who believe on the Messiah are the “sons of light”. Just as the first Creation began with “Let there be light!” so the New Creation begins with the entrance of light into the heart of the believer. The coming of Jesus the Messiah into the world was the dawning of a new day for man.

You would think that blind sinners would welcome the light, but such is not always the case. The coming of the true light brought conflict as the powers of darkness opposed it. A literal translation of John 1:5 reads, “And the light keeps on shining in the darkness, and the darkness has not overcome it or understood it.” The Greek verb can mean “to overcome” or “to grasp, to understand.” Throughout the good news book of John, you will see both attitudes revealed: people will not understand what the Master Jesus is saying and doing and, as a result, they will oppose Him. John 7–12 records the growth of that opposition, which ultimately led to the crucifixion of the Messiah.

Whenever Jesus taught a spiritual truth, His listeners interpreted it in a material or physical way. The light was unable to penetrate the darkness in their minds. This was true when He spoke about the temple of His body, the new birth, the living water, eating His flesh, spiritual freedom, death as sleep, and many other spiritual truths. Satan strives to keep people in the darkness, because darkness means death and hell, while light means life and heaven.

This fact helps explain the ministry of John the Baptizer. John was sent as a witness to Jesus the Messiah, to tell people that the Light had come into the world. The nation of Israel, in spite of all its spiritual advantages, was blind to their own Messiah! The word witness is a key word in this book; John uses the noun fourteen times and the verb thirty-three times. John the Baptizer was one of many people who bore witness to Jesus, “This is the Son of God!” Alas, John was martyred and the Jewish leaders did nothing to prevent it.

Why did the nation reject Jesus as the Messiah? Because they “knew Him not.” They were spiritually ignorant. Jesus is the “true Light”—the original of which every other light is a copy—but the Jews were content with the copies. They had Moses and the Law, the temple and the sacrifices; but they did not comprehend that these “lights” pointed to the true Light who was the fulfillment, the completion, of the Old Agreement.

As you study John’s good news book, you will find Jesus teaching the people that He is the fulfillment of all that was typified in the Law. It was not enough to be born a Jew; they had to be born again, born from above. He deliberately performed two miracles on the Sabbath to teach them that He had a new rest to give them. He was the satisfying manna and the life-giving Water. He is the Shepherd of a new flock, and He is a new Vine. But the people were so shackled by religious tradition that they could not understand spiritual truth. Jesus came to His own world that He had created, but His own people, Israel, could not understand Him and would not receive Him.

But today we need not commit those same blunders. John 1:12–13 gives us the marvelous promise of God that anyone who receives Christ will be born again and enter the family of God! John says more about this new birth in John 3, but he points out here that it is a spiritual birth from God, not a physical birth that depends on human nature.

The Light is still shining! Have you personally received the Light and become a child of God?

3 thoughts on ““In Jesus was life, and that life was the light of men. That light shines in the darkness, and yet the darkness did not overcome it.” ~Apostle John”