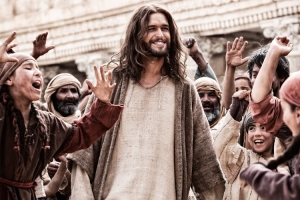 Before Jesus, the High Priest had to offer up sacrifices to blot out the continuous nature of our missing God’s goal. He also had to do this for himself as well since he missed God’s goal as well.

Jesus, God’s son, offered up himself, who never missed God’s goal for his life. God set him aside for this role. He is now our High Priest.  We share in his new plan. It was the perfect plan, perfectly executed. Only Jesus could do it for us.

Jesus wasn’t elected to this position. God, His Father, appointed Him. No popular vote here. No democracy in God’s world. His decision and it was perfect.

Thanks be to our magnificent Leader!!

No one elects himself to this honored position of High Priest. He’s called to it by God, as Aaron was. Neither did Christ presume to set himself up as high priest, but was set apart by the One who said to him, “You’re my Son; today I celebrate you!” In another place God declares, “You’re a priest forever in the royal order of Melchizedek.” Hebrews 5:40-16

Jesus did not say that He had no kingdom in this world, or that He would never rule on earth. He does have a kingdom in this world, wherever there are people who have trusted Him and yielded to His sovereignty. One day He shall return and establish a righteous kingdom on earth. Pilate’s concern was the source of this kingdom: where did Jesus derive His authority?

Jesus explained who He is and what kind of kingdom belonged to Him. Pilate probably did not grasp the significance of these profound words, but we today can discern some of the meaning Jesus had in mind. He was “born,” which indicates His humanity; but He also “came into the world,” which indicates His deity. The fact that Jesus came “into the world” means that He had existed before His birth at Bethlehem; and this is an important and repeated truth in John’s Gospel.

But Jesus not only told Pilate of His origin; He also explained His ministry: to bear witness unto the truth. His was a spiritual kingdom of truth; and He won people to His cause, not through force, but through conviction and persuasion. He spoke the truth of God’s Word, and all who were His people would respond to His call. Rome’s weapon was the sword; but our Lord’s weapon was the truth of God, the sword of the Spirit.

1 thought on “Was Jesus elected to be King?”