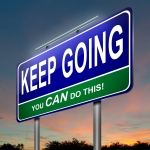 Many of our struggles about faith have to do with timing. We believe, at least in theory that God will keep His promises – but when?

God’s goal for us is to endure and be patient. Having faith requires confidence. There is a great reward to being persistent.

All of this is about doing what God wants us to. This is so important to get clear about.

Therefore, do not throw away your confidence, which has a great reward. For you have need of endurance, so that when you have done the will of God, you may receive what was promised. Hebrews 10:35-36

I admit it is tough to always be obedient. I have a rebellious streak in me.

The Bible has much to say about obedience. In fact, obedience is an essential part of the the disciple’s faith.

Jesus Himself was “obedient unto death, even death on a cross” (Philippians 2:8).

For the disciples, the act of taking up our cross and following the Messiah (Matthew 16:24) means obedience. The Bible says that we show our love for Jesus by obeying Him in all things: “If you love Me, keep My commandments” (John 14:15).

Yikes! A the disciple who is not obeying the Messiah’s commands can rightly be asked, “Why do you call me, ‘Master, Master,’ and do not do what I say?” (Luke 6:46).

Obedience — The example of Jesus the Messiah: I want to learn how to be obedient. Jesus is my example. Obedience is a willingness to submit myself to the will of God and to put it into effect. Scripture emphasizes the necessity for the commandments of Jesus to be followed, gives examples and reasons, and describes the rewards.

There is a concept in being a slave. You only have one Master. Jesus is clear on this when he says you can’t be a slave to God and money (aka wealth). Jesus drives the point home in many places. Being a slave is different from being a servant.