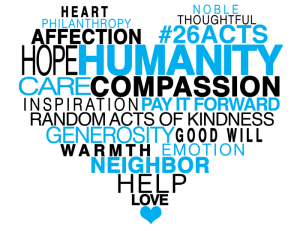 Jesus challenges us. He tells us stories to shake us up. He wants us to love like our heavenly Father loves.

There is the story about a man traveling from Jerusalem to Jericho. On the way he was attacked by robbers. They took his clothes, beat him up, and went off leaving him half-dead. A priest was on his way down the same road, but when he saw him he angled across to the other side. Then a Levite religious man showed up; he also avoided the injured man.

A Samaritan (hated by the Jewish people) traveling the road came on him. When he saw the man’s condition, his heart went out to him. He gave him first aid, disinfecting and bandaging his wounds. Then he lifted him onto his donkey, led him to an inn, and made him comfortable. In the morning he took out two silver coins and gave them to the innkeeper, saying, ‘Take good care of him. If it costs any more, put it on my bill—I’ll pay you on my way back.’

So Jesus tells this to a group of religious leaders and elites who were trying to trap Him.

God’s goal for us is to treat anyone that comes across our path kindly and with mercy, just as God does. We are to do the same as this Samaritan.

“Which of these three do you think proved to be a neighbor to the man who fell into the hands of the robbers?”

“The one who showed mercy to him,” he said.

We may read this passage and think only of “the high cost of caring,” but it is far more costly not to care. The priest and the Levite lost far more by their neglect than the Samaritan did by his concern.

They lost the opportunity to become better men and good stewards of what God had given them. They could have been a good influence in a bad world, but they chose to be a bad influence. The Samaritan’s one deed of mercy has inspired sacrificial ministry all over the world. Never say that such ministry is wasted!

God sees to it that no act of loving service in the Messiah’s name is ever lost.

It all depends on your outlook. To the thieves, this traveling Jew was a victim to exploit, so they attacked him. To the priest and Levite, he was a nuisance to avoid, so they ignored him. But to the Samaritan, he was a neighbor to love and help, so he took care of him.

What Jesus said to the lawyer, He says to us: “Go and keep on doing it likewise” (literal translation).

Mercifulness is an attitude of compassion and care, grounded in the nature of God himself, made manifest in the life and ministry of Jesus the Messiah, and expected of believers.

I want mercy in my life. Compassion is a wonderful gift from God. I am challenged by Jesus to replicate it in all of my relationships. I am to be a person of mercy. It will bring me happiness and mercy in my own life. Now that is some very good news.

“Happy (aka Blessed) are the merciful, for they shall receive mercy.” | Matthew 5:7

The mercifulness of God Nothing moves us to forgive like the wondering knowledge that we have ourselves been forgiven. Nothing proves more clearly that we have been forgiven than our own readiness to forgive. To forgive and to be forgiven, to show mercy and to receive mercy: these belong indissolubly together, as Jesus illustrated in his parable of the unmerciful servant. Or, interpreted in the context of the beatitudes, it is ‘the meek’ who are also ‘the merciful’. For to be meek is to acknowledge to others that we are sinners; to be merciful is to have compassion on others, for they are sinners too.

But those who show mercy find it. ‘How blest are those who show mercy; mercy shall be shown to them’ (NEB). The same truth is echoed in the next chapter: ‘If you forgive men their trespasses, your heavenly Father also will forgive you.’ This is not because we can merit mercy by mercy or forgiveness by forgiveness, but because we cannot receive the mercy and forgiveness of God unless we repent, and we cannot claim to have repented of our sins if we are unmerciful towards the sins of others.

Jesus does not specify the categories of people he has in mind to whom his disciples are to show mercy. He gives no indication whether he is thinking primarily of those overcome by disaster, like the traveller from Jerusalem to Jericho whom robbers assaulted and to whom the good Samaritan ‘showed mercy’, or of the hungry, the sick and the outcast on whom he himself regularly took pity, or of those who wrong us so that justice cries out for punishment but mercy for forgiveness. There was no need for Jesus to elaborate. Our God is a merciful God and shows mercy continuously; as a citizen of his kingdom I must show mercy too.

‘Mercy’ is compassion for people in need. We can distinguish it from ‘grace’: ‘The noun eleos (mercy) … always deals with what we see of pain, misery and distress, these results of sin; and charis (grace) always deals with the sin and guilt itself. The one extends relief, the other pardon; the one cures, heals, helps, the other cleanses and reinstates.’

Of course the world (at least when it is true to its own nature) is unmerciful, as indeed also the church in its worldliness has often been. The world prefers to insulate itself against the pains and calamities of men. It finds revenge delicious, and forgiveness, by comparison, tame.

2 thoughts on “What does Jesus want us to keep doing? What do we need more of?”