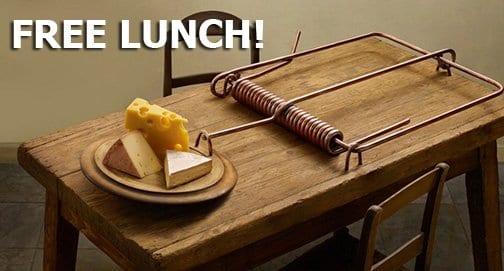 My dad (perhaps like your dad) always reminded me  that there is no such thing as a free lunch.

The king answered Araunah, “No, I insist on buying it from you for a price, for I will not offer to the Lord my God burnt offerings that cost me nothing.” David bought the threshing floor and the oxen for twenty ounces of silver. 25 He built an altar to the Lord there and offered burnt offerings and fellowship offerings. Then the Lord was receptive to prayer for the land, and the plague on Israel ended. | Christian Standard Bible. (2020). (2 Sa 24:24–25). Nashville, TN: Holman Bible Publishers.

The Master sent Gad, a prophet, to David with a list of three calamities from which he could choose and by which the Master would register His displeasure and purge out the evil. The choices were three years of famine … three months of enemy pursuit, and three days of pestilence David chose the third option, throwing himself on the mercy of God.

The result was a plague which took the lives of 70,000 people. When Jerusalem itself was threatened, the Master intervened and commanded His angelic destroyer to desist. David then confessed his own personal sin and urged the Master to spare His innocent people. Then, in order to make proper restitution and atonement, David arranged to construct an altar to the Master. Gad told him that it must be built on the threshing floor of Araunah, a citizen of Jerusalem, since it was there that the angel had been commanded to cease his destruction of the city.

According to well-founded tradition, this threshing floor, a wide, smooth, ledge-like surface, was on Mount Moriah, just outside the northern wall of David’s Jerusalem. But David had no right to it because it was owned by a citizen. When Araunah learned of David’s desire, however, he was willing not only to give the threshing floor to the king but also to provide the wood and sacrifices needed.

Having obtained the site, David built the altar, offered the sacrifices, and interceded on behalf of his people. God heard and answered, and the land was healed of the plague. This was where Abraham had offered Isaac. And on this same spot Solomon later constructed his magnificent temple.

2 thoughts on “Are we willing to pay what it will cost us?”