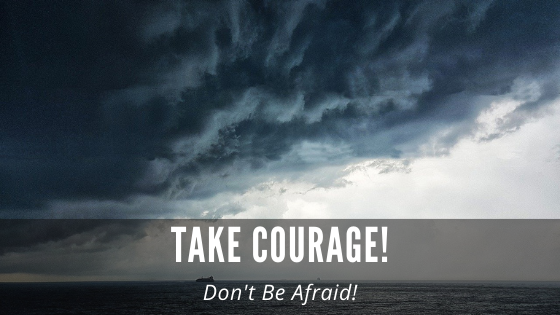 The five thousand had just been feed. It was a stunning day. God had been shown, through His son Jesus, to be an amazing God. As soon as the meal was finished, Jesus insisted that the disciples get in a boat and go on ahead to the other side while he dismissed the people.

Immediately he made the disciples get into the boat and go before him to the other side, while he dismissed the crowds. And after he had dismissed the crowds, he went up on the mountain by himself to pray. When evening came, he was there alone, but the boat by this time was a long way from the land, beaten by the waves, for the wind was against them. And in the fourth watch of the night he came to them, walking on the sea. But when the disciples saw him walking on the sea, they were terrified, and said, “It is a ghost!” and they cried out in fear. 27 But immediately Jesus spoke to them, saying, “Take heart [have courage]; it is I. Do not be afraid.”

And Peter answered him, “Lord [Master], if it is you, command me to come to you on the water.” He said, “Come.” So Peter got out of the boat and walked on the water and came to Jesus. But when he saw the wind, he was afraid, and beginning to sink he cried out, “Lord, save me.” Jesus immediately reached out his hand and took hold of him, saying to him, “O you of little faith, why did you doubt?” And when they got into the boat, the wind ceased. And those in the boat worshiped him, saying, “Truly you are the Son of God.”

Jesus is all about courage. Jesus lets us know not to be afraid. Sometimes we are. Jesus comforts us anyway. Come on He says. This is some very good news. Jesus is going to take care of us.

In the Bible, courage is also called “good cheer” as in Mark 6:50 when Jesus gave the command to the disciples who saw Him walking on the water of the Sea of Galilee and coming toward them.

God’s promises to us it is all going to be okay. We can be confident, courageous, and of good cheer because of Jesus.

In this great promise lies the basis of our confidence, our courage, and our good cheer.

4 thoughts on “Are we ready to be bold and have courage in Jesus?”