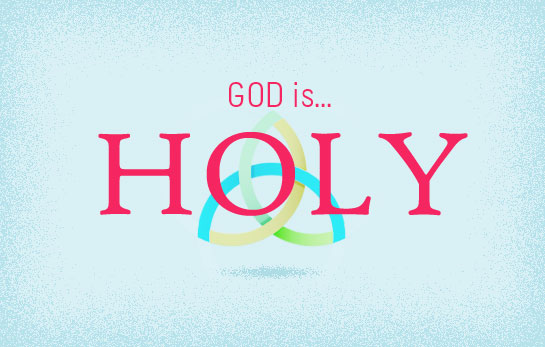 God’s love does amazing things in our lives. We are transformed by it into new creations.

“The love of God working in me causes me to hate anything that is not in keeping with God’s holiness.” ~Oswald Chambers

All the ways of God are holy. He is set apart from us in every thing He does.

The phrase “holy, holy, holy” appears twice in the Bible, once in the Old Testament (Isaiah 6:3) and once in the New (Revelation 4:8).

And the four living creatures, each of them with six wings, are full of eyes all around and within, and day and night they never cease to say,

“Holy, holy, holy, is the Master  God Almighty, who was and is and is to come!”

Both times “Holy, Holy, Holy” is used, the phrase is spoken or sung by heavenly creatures, and both times it occurs in the vision of a man who was transported to the throne of God: first by the prophet Isaiah and then by the apostle John.

Biblical use of the term “holy” has to do primarily with God’s separating from the world that which He chooses to devote to Himself. As God’s redemptive plan unfolded through the OT, the “holy” became associated with the character of God’s separated people conforming to His revealed law.

When the time became ripe for the saving work of Jesus the Messiah, His redeemed people came to be known as saints (literally, “holy ones”). The cross made this possible by inaugurating the fulfillment of the preparatory OT teachings on the holy, opening the way for God’s Holy Spirit to indwell His people.

Does Jesus the Messiah purify believers?

I confess to God that I have missed His goal for my life (aka sin). That has me walking in the light. Jesus cleanses me from my sins. That is such a huge deal. I don’t have to pay the price because He did for me.

That is worth a big shout out. Wow! Imagine that.

God is not angry with us. How do we know. The Bible reassures us that “God so loved [not hated] the world” that He gave His Son Jesus to purify us from missing God’s goal.

How, then, can a holy God uphold His own justice and still forgive sinners? The answer is in the sacrifice of the Messiah Jesus. At the cross, God in His holiness judged sin. God in His love offers Jesus to the world as Savior. God was just in that He punished sin, but He is also loving in that He offers free forgiveness through what Jesus did at Calvary.

The Messiah is the Sacrifice for the sins of the whole world, but He is Advocate only for believers. “We [disciples of Jesus] have an Advocate with the Father.” The word “advocate” used to be applied to lawyers. The word John uses is the very same word Jesus used when He was talking about the coming of the Holy Spirit. It means, literally, “one called alongside.” When a man was summoned to court, he took an advocate (lawyer) with him to stand at his side and plead his case.

Jesus finished His work on earth — the work of giving His life as a sacrifice for sin. Today He has an “unfinished work” in heaven. He represents us before God’s throne. As our High Priest, He sympathizes with our weaknesses and temptations and gives us grace. As our Advocate, He helps us when we sin. When we confess our sins to God, because of Christ’s advocacy God forgives us.

Confession is not praying a lovely prayer, or making pious excuses, or trying to impress God and other Christians. True confession is naming sin—calling it by name what God calls it: envy, hatred, lust, deceit, or whatever it may be. Confession simply means being honest with ourselves and with God, and if others are involved, being honest with them too. It is more than admitting sin. It means judging sin and facing it squarely.

When we confess our sins, God promises to forgive us. But this promise is not a “magic rabbit’s foot” that makes it easy for us to disobey God!

Of course, cleansing has two sides to it: the judicial and the personal. The blood of Jesus the Messiah, shed on the cross, delivers us from the guilt of sin and gives us right standing (“justification”) before God. God is able to forgive because Jesus’ death has satisfied His holy Law.

But God is also interested in cleansing a sinner inwardly. David prayed, “Create in me a clean heart, O God”. When our confession is sincere, God does a cleansing work in our hearts by His Spirit and through His Word.

The great mistake King David made was in trying to cover his sins instead of confessing them. For perhaps a whole year he lived in deceit and defeat. No wonder he wrote that a man should pray “in a time of finding out”.

When should we confess our sin? Immediately when we discover it! “He that covers his sins shall not prosper; but whosoever confesses and forsakes them shall have mercy” (Prov. 28:13). By walking in the light, we can see the “dirt” in our lives and deal with it immediately.

2 thoughts on “Is the love of God working in us today?”