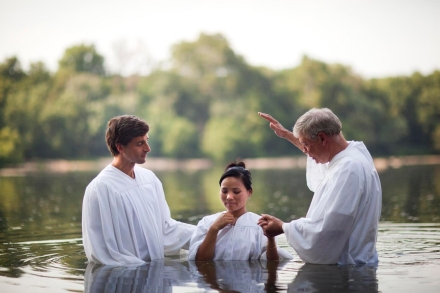 I came to Jesus and decided to follow Him at the age of 12. I was immediately baptized in water. Being a part of the Baptist denomination at the time, I was immersed. I consider this good news. I am a new creation in Jesus. I have been born again to newness of life. w00t!

We rehearsed how it would all come down with the minister before hand. They gave me a folded handkerchief that I was to give to the minister right before it happened.

Stapled to the cloth was my name, so he wouldn’t forget who I was or say the wrong name. It was quite the ritual but it meant something to me. It still does!

It was a VERY long time ago but here is what the minister said:

Jesus thought it was important to be baptized. God spoke and said He was pleased with Jesus. What else do we need to know. Baptism is VERY important.

Baptism (βάπτισμα, baptisma) is the act of washing in water as part of a purification ritual. The rite of formal initiation into the the discipleship of Jesus through water. Regarded by many the followers as a sacrament (though some groups prefer the term ordinance). Though several allusions to baptism exist in the Old Testament, baptism is primarily a New Testament concept.

After the time of John the Baptist, baptism took on an expanded meaning, as it signified turning from death to life through the power of the Messiah’s death and resurrection. Over time, the apostles and early church fathers developed this doctrine further, and the practice began to take on new meaning for different communities of faith throughout the centuries.

Then Jesus arrived from Galilee at the Jordan coming to John, to be baptized by him. But John tried to prevent Him, saying, “I have need to be baptized by You, and do You come to me?”  But Jesus answering said to him, “Permit it at this time; for in this way it is fitting for us to fulfill all righteousness.” Then he permitted Him.  After being baptized, Jesus came up immediately from the water; and behold, the heavens were opened, and he saw the Spirit of God descending as a dove and lighting on Him, and behold, a voice out of the heavens said, “This is My beloved Son, in whom I am well-pleased.” | Matthew 3:13–17

How did it all start? Washing was the means of achieving ritual purity in the old covenant. It carried through to the new covenant time. The Jewish people understood what it meant.

3 thoughts on “How important is baptism?”