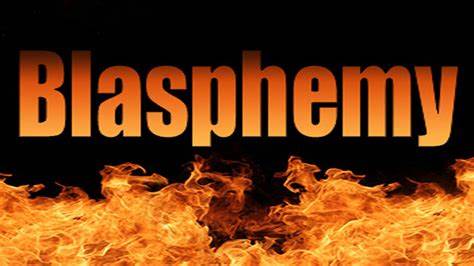 Jesus has important things to say to us. If we are not careful, we will miss the point of God’s message. We need to pay attention. I hear many today denying God and saying He is evil. That is dangerous territory.

May I head the warning. May I listen carefully to Jesus.

Truly, I say to you, all sins will be forgiven the children of man, and whatever blasphemies they utter, but whoever blasphemes against the Holy Spirit never has forgiveness, but is guilty of an eternal sin”— for they were saying, “He has an unclean spirit.

Blaspheme. This word is the transliteration of blasphēmeō (βλασφημεω) “to speak reproachfully, to rail at, revile, calumniate.” The word means “malicious misrepresentation.” It is used specifically of those who by contemptuous speech intentionally come short of the reverence due to God or to sacred things. Here the words speak of the action of the scribes, who, knowing that our Master Jesus was performing miracles in the power of the Holy Spirit, deliberately and knowingly attribute them to Satan, and do this in an attempt to break the attesting power of the miracles our Messiah was performing. This is the so-called unpardonable sin.

When you ask people, “What is the unpardonable sin?” they usually reply, “It is blaspheming the Holy Spirit” or “It is the sin of attributing to the devil the works of the Holy Spirit.” Historically speaking, these statements are true; but they do not really answer the question. How do we today blaspheme the Spirit of God? What miracles is the Holy Spirit performing today that might be carelessly or even deliberately attributed to Satan? Must a person see a miracle in order to commit this terrible sin?

The answer lies in the nature of God and in His patient dealings with the nation of Israel. God the Father sent John the Baptist to prepare the nation for the coming of their Messiah. Many of the common people responded to John’s call and repented, but the religious leaders permitted John to be arrested and eventually killed. God the Son came as promised and called the nation to trust Him, but those same religious leaders asked for Jesus to be killed. On the cross, our Lord prayed, “Father, forgive them, for they know not what they do”

What about today? Some argue that the blasphemy of the Holy Spirit cannot be repeated today, although some people try. Jesus is not on earth—He is seated at the right hand of God. No one can personally witness Jesus performing a miracle and then attribute that power to Satan instead of the Spirit.

I don’t see that in the scripture. Perhaps I’ve missed something. I think we should take the warning of Jesus seriously. Jesus knows what He is talking about.

Digging Deeper – What is blasphemy?

For it is impossible, in the case of those who have once been enlightened, who have tasted the heavenly gift, and have shared in the Holy Spirit, and have tasted the goodness of the word of God and the powers of the age to come, and then have fallen away, to restore them again to repentance, since they are crucifying once again the Son of God to their own harm and holding him up to contempt. (Heb. 6:4–6)[2]

This understanding of the unpardonable sin also fits well with Hebrews 6:4–6. There the persons who “have fallen away” have had all sorts of knowledge and conviction of the truth: they have “been enlightened” and have “tasted the heavenly gift”; they have participated in some ways in the work of the Holy Spirit and “have tasted the goodness of the word of God and the powers of the age to come,” yet they then willfully turn away from Christ and hold “him up to contempt” (Heb. 6:4–6). They too have put themselves beyond the reach of God’s ordinary means of bringing people to repentance and faith. Knowing and being convinced of the truth, they willfully reject it.

However, 1 John 5:16–17 seems to fall into another category. That passage does not speak of a sin that can never be forgiven but rather about a sin that, if persisted in, will lead to death. This sin seems to involve the teaching of serious doctrinal error about Christ, a kind of teaching that contradicts the heart of the gospel. In the context of asking in faith according to God’s will (1 John 5:14–15) John simply tells us that he does not say that we can pray in faith for God simply to forgive that sin unless the person repents—but he certainly does not prohibit praying that the heretical teachers would turn from their heresy and repent and thereby find forgiveness. Many people who teach serious doctrinal error have still not gone so far as to commit the unpardonable sin and bring on themselves the impossibility of repentance and faith by their own hardness of heart.[3]

Profane or contemptuous speech or writing about (or action toward) God. In a general sense, “blasphemy” can refer to any slander, including any word or action that insults or devalues another being. In Greek literature the term was used for insulting or deriding living or dead persons, but it was extended to cover the gods as well, including both doubting the power of or mocking the nature of a god.[4]

A transliteration of the Greek term blasphēmia, meaning “slander, revile.” In the Bible, the term blasphemy is used describe the act of intentionally or carelessly profaning God. The Old Testament understood blasphemy as a serious sin, punishable in death by stoning (Lev 24:13–16). Although not mentioning the death penalty, the New Testament writers affirmed the seriousness of blasphemy as a sin. Jesus expanded the idea to include blasphemy against the Holy Spirit, for which there is no forgiveness (Mt 12:31). In ethical discourse, blasphemy is related to the wider question of proper speech, a category that includes a variety of practices, including oaths.[5]

In the New Testament, the most common form of blasphemy is blasphemy against God. Jesus was accused of blasphemy by the Jewish leaders because He claimed to have the power to forgive sins (Mark 2:7). On another occasion, the Jewish leaders wanted to stone Jesus to death because, as they said to Him, “You, being a man, make Yourself out to be God” (John 10:33, nasb). Jesus was condemned by the highest Jewish court, the Sanhedrin, on the charge of blasphemy, because He claimed to be the Son of Man (the Messiah). The Sanhedrin found no evidence that Jesus was such an exalted personage—thus He appeared to be mocking “the Messiah” and, by extension, God Himself (Mark 14:64). But Jesus told the Jewish leaders that they had committed blasphemy against the Holy Spirit because they had said that Jesus’ miracles (really done by the power of the Holy Spirit) were performed by the power of the devil (Beelzebub). This was true blasphemy! (See Matt. 12:31; Mark 3:28–29; Luke 12:10.)[6]

The profaning, desecration and taking in vain of the name of God, or the reviling of any of his works or deeds. It is strongly forbidden by God as dishonoring to his name.[7]

You shall not make wrongful use of the name of the Lord God, for the Lord will not acquit anyone who misuses his name. Exodus 20:7 NRSV

Every human sin and blasphemy will be forgiven, but blasphemy against the Spirit will not be forgiven. Matthew 12:31 NJB

[In the last days] Men shall be lovers of their own selves, covetous, boasters, proud, blasphemers … 2 Timothy 3:2 KJV

Watch over yourselves that you may never swear. I invoked God my helper and he afforded me his succor not to swear, now nothing is more easy to me than not to swear. St Augustine of Hippo

Beware of worshiping Jesus as the Son of God and professing your faith in him as the Savior of the world, while you blaspheme him by the complete evidence in your daily life that he is powerless to do anything in and through you. Oswald Chambers

For eighty and six years have I been his [Christ’s] servant, and he has done me no wrong, and how can I blaspheme my King who saved me? St Polycarp

Profanity fixes the other person’s attention on my words rather than my thoughts. Hugh Prather

Profanity is the use of strong words by weak people. William Arthur Ward[8]

5 thoughts on “Is Jesus warning us?”