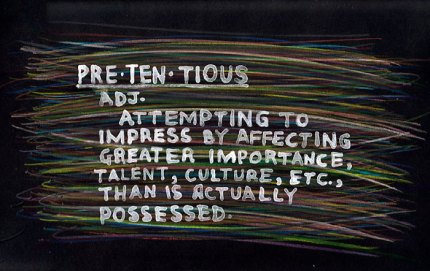 Here is something for me to assess.

A pretentious, showy life is an empty life; a plain and simple life is a full life.

God’s goal: God wants us to obey. Today should be a day filled with loving God and loving our neighbors. We want others to see us as kind and loving. Some times we are not. Jesus died for us to restore us to that position with God. It is a gift and not something we earned.

Jesus warns us about pretension. Jesus is not a big fan of hypocrisy. He confronts it head on. This word from Jesus is particularly compelling. Yikes!

Woe to you, scribes and Pharisees, hypocrites! For you are like whitewashed tombs which on the outside appear beautiful, but inside they are full of dead men’s bones and all uncleanness. So you, too, outwardly appear righteous to men, but inwardly you are full of hypocrisy and lawlessness.

The life Jesus calls us to live is a simple life focused on doing His will. It is to build up treasure in the Kingdom of God, not here. It is to be transparent not pretentious or hypocritical.

That is plenty to focus on, I think! It is enough for today.

Digging Deeper – What is hypocrisy?

If you want to dig deeper, here are some additional resources. In essence, “hypocrisy” refers to the act of claiming to believe something but acting in a different manner. The word is derived from the Greek term for “actor”—literally, “one who wears a mask”—in other words, someone who pretends to be what he is not.The Bible calls hypocrisy a sin. There are two forms hypocrisy can take: that of professing belief in something and then acting in a manner contrary to that belief, and that of looking down on others when we ourselves are flawed.

The act of pretending to be what one is not. Hypocrisy originated as a technical term in Greek drama that meant playing a part by an actor who in actuality bears no relation to the role itself. In the Bible, Jesus condemned hypocrisy as the feigned façade of goodness that a person uses to cover his or her true self-interested motives (Mt 6:1–5; 7:3–5).[2]

Hypocrisy,” “hypocrite” are frequent in the NT, chiefly in Christ’s discourses in the Gospels. The word hupokrisis (primarily, “an answer,” “response”) meant generally, in classical Gr, stage-playing, acting, the histrionic art; hence it came to mean acting a part in life, etc. We find hupokrisis in this sense in 2 Macc 6:25, RV “dissimulation,” and hupokrínomai, “to pretend,” “to feign,” etc. Ecclus 1:29; 32:15; 33:2, trd “hypocrite”; 2 Macc 5:25, “pretending peace,” RV “playing the man of peace”; 6:21, RV “to make as if.” Hupokritēs (lit. “an actor”) is the LXX for ḥānēph (Job 34:30; 36:13), equivalent to bad, wicked, godless, which is perhaps included in some of Our Lord’s uses of the words, e.g. Mt 23:27 f, “full of hypocrisy and iniquity” (cf vs 29 f; 24:51); but, in general, the meaning is acting a part, false, deceptive and deceived, formally and outwardly religious and good, but inwardly insincere and unrighteous; the hypocrite may come to deceive himself as well as others, but “the hypocrite’s hope shall perish” (Job 8:13 AV). On no class did Our Lord pronounce such severe condemnation as on the hypocrites of His day.[3]

An outward pretence masking an inner reality. Scripture condemns hypocrisy, especially in matters of faith. Believers should express their commitment to God in their words and their deeds, as well as in their inner motivation.[4]

They do but flatter with their lips, and dissemble in their double heart. Psalm 12:2 BCP

You hypocrite, first take the plank out of your own eye, and then you will see clearly to remove the speck from your brother’s eye. Matthew 7:5 NIV

You hypocrites! Isaiah was right when he prophesied about you: “These people honor me with their lips, but their hearts are far from me. They worship me in vain; their teachings are but rules taught by men.” Matthew 15:7–9 NIV

… treacherous, reckless, swollen with conceit, lovers of pleasure rather than lovers of God, having the appearance of godliness, but denying its power. Avoid such people. 2 Timothy 3:4–5 ESV

He who beats his heart, but does not mend his ways, does not remove his sins but hardens them. St Augustine of Hippo

An apple, if it be rotten at the core, though it have a fair and shining outside, yet rottenness will not stay long, but will taint the outside also … hypocrisy will discover itself in the end. John Bond

It is no fault of Christianity if a hypocrite falls into sin. St Jerome

Solemn prayers, rapturous devotions, are but repeated hypocrisies unless the heart and mind be conformable to them. William Law

God is not deceived by externals. Clive Staples (C.S.) Lewis

Men never do evil so completely and cheerfully as when they do it from religious conviction. Blaise Pascal

Hypocrisy is the homage which vice pays to virtue. François de la Rochefoucauld

Hypocrites in the church? Yes, and in the lodge, and at home. Don’t hunt through the church for a hypocrite. Go home and look in the glass. Hypocrites? Yes. See that you make the number one less. William Ashley (Billy) Sunday

I cannot believe that a man is on the road to heaven when he is habitually performing the kind of deeds that would logically indicate that he ought to be on his way to hell. Aiden Wilson (A.W.) Tozer[5]

2 thoughts on “Are we trying to impress others?”