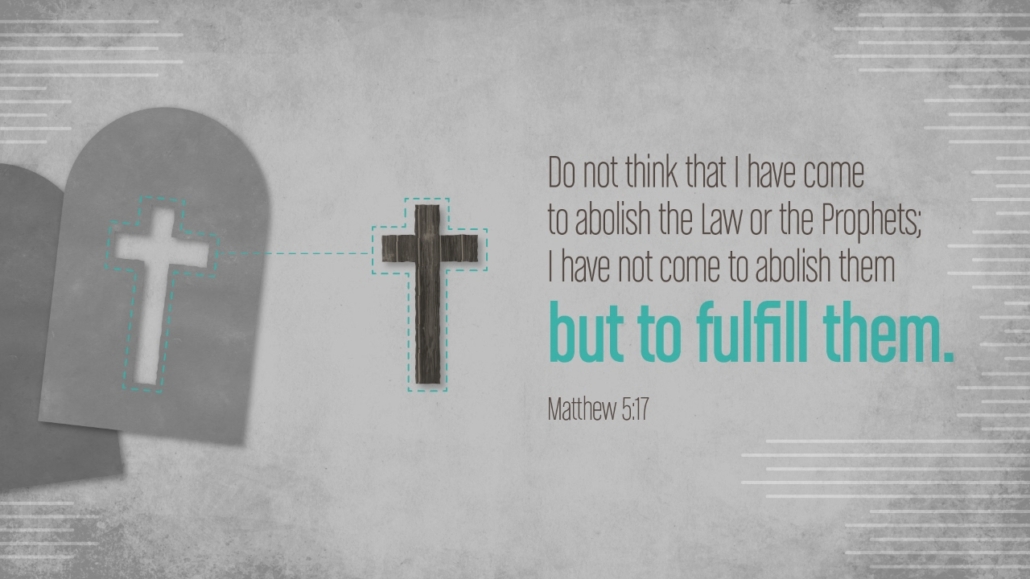 Jesus continues His manifesto (found in Matthew 5-7). There is a lot to learn here. Jesus is being clear, as He always is. This is not what I was thinking He would say.

Jesus begins this section by telling the disciples not for one moment to imagine that he had come to abolish the law and the prophets, i.e. the whole Old Testament or any part of it. The way in which Jesus phrases this negative statement suggests that some had indeed been thinking the very thought which he now contradicts.

Do not think that I have come to abolish the Law or the Prophets; I have not come to abolish them but to fulfill them. For truly, I say to you, until heaven and earth pass away, not an iota, not a dot, will pass from the Law until all is accomplished.

The word ‘therefore’ introduces the deduction which Jesus now draws for his disciples from the enduring validity of the law and his own attitude with respect to it. It reveals a vital connection between the law of God and the kingdom of God. Because he has come not to abolish but to fulfil, and because not an iota or dot will pass from the law until all has been fulfilled, therefore greatness in the kingdom of God will be measured by conformity to it.

Nor is personal obedience enough; the disciples of the Messiah must also teach to others the permanently binding nature of the law’s commandments. True, not all the commandments are equally ‘weighty’. Yet even one of the least of these commandments, precisely because it is a commandment of Jesus the King, is important.

To relax it — i.e. to loosen its hold on our conscience and its authority in our life — is an offence to God whose law it is. To disregard a ‘least’ commandment in the law (in either obedience or instruction) is to demote oneself into a ‘least’ subject in the kingdom; greatness in the kingdom belongs to those who are faithful in doing and teaching the whole moral law. ‘The peerage of the Messiah’s kingdom’, wrote Spurgeon, ‘is ordered according to obedience.’

Jesus now goes further still. Not only is greatness in the kingdom assessed by a righteousness which conforms to the law, but entry into the kingdom is impossible without a conformity better (much better: the Greek expression is very emphatic) than that of the scribes and Pharisees, for God’s kingdom is a kingdom of righteousness.

But surely, someone will protest, the religious elites and theologians (scribes and Pharisees) were famous for their righteousness? Was not obedience to God’s law the master-passion of their lives? Did they not calculate that the law contains 248 commandments and 365 prohibitions, and did they not aspire to keeping them all?

Our Master and King’s statement must certainly have astonished his first hearers as it astonishes us today. But the answer to these questions is not far to seek. the disciple’s righteousness far surpasses pharisaic righteousness in kind rather than in degree.

We must not imagine (as some do today) that when we have the Spirit we can dispense with the law, for what the Spirit does in our hearts is, precisely, to write God’s law there.

Yet Jesus was more radical still, for if the Essenes asked for ‘more and more obedience’, he asked for ‘deeper and deeper obedience’.

The rest of Matthew 5 contains examples of this greater, or rather deeper, righteousness. It consists of six parallel paragraphs which illustrate the principle Jesus has just propounded in verses 17 to 20 of the perpetuity of the moral law, of his coming to fulfil it and of his disciples’ responsibility to obey it more completely than the scribes and Pharisees were doing. Each paragraph contains a contrast or ‘antithesis’ introduced by the same formula (with minor variations): You have heard that it was said to the men of old … But I say to you … (21, 22).

What Jesus is contradicting is not the law itself, but certain perversions of the law of which the scribes and Pharisees were guilty. Far from contradicting the law, Jesus endorses it, insists on its authority and supplies its true interpretation.

So here was a contemporary addition to the law, which was intended to interpret it, but in fact distorted it. When we look more closely at the other five antitheses, it becomes plain that a similar distortion is implied. It is these distortions of the law which Jesus rejected, not the law itself. After all, the first two antitheses do not read ‘It was said “you shall not commit murder and adultery”, but I say you may’. Rather, ‘but I say you shall not even have angry or lustful thoughts’.

Jesus’ quarrel was not over the law, for both the Jewish leaders and he accepted its divine authority, but over its true interpretation.

There is the Messiah’s known attitude to the Old Testament. In the previous chapter Matthew has given an account of his temptations during forty grueling days in the Judean desert. Each subtle enticement of the devil was countered by an appropriate quotation from Old Testament Scripture.

What, then, were the religious elites (scribes and Pharisees) doing? In general, they were trying to reduce the challenge of the law, to ‘relax’ the commandments of God, and so make his moral demands more manageable and less exacting.

What Jesus did was to reverse both tendencies. He insisted instead that the full implications of God’s commandments must be accepted without imposing any artificial limits, whereas the limits which God had set to his permissions must also be accepted and not arbitrarily increased. It may be helpful to see the application of these principles to the antitheses in summary before considering them in detail.

King Jesus, however, reaffirmed the original restrictions. He called divorce on other grounds ‘adultery’ and insisted in personal relationships on the renunciation of all revenge. This preliminary look at the antitheses has shown us that Jesus did not contradict the law of Moses. On the contrary, this is in effect what the Pharisees were doing.

To him Moses’ law was God’s law, whose validity was permanent and whose authority must be accepted. In the Jesus Manifesto, as Calvin correctly expressed it, we see Jesus not ‘as a new legislator, but as the faithful expounder of a law which had been already given’. The religious elites and theologians had ‘obscured’ the law; Jesus ‘restored it to its integrity’.

4 thoughts on “Did Jesus come to abolish the Law?”