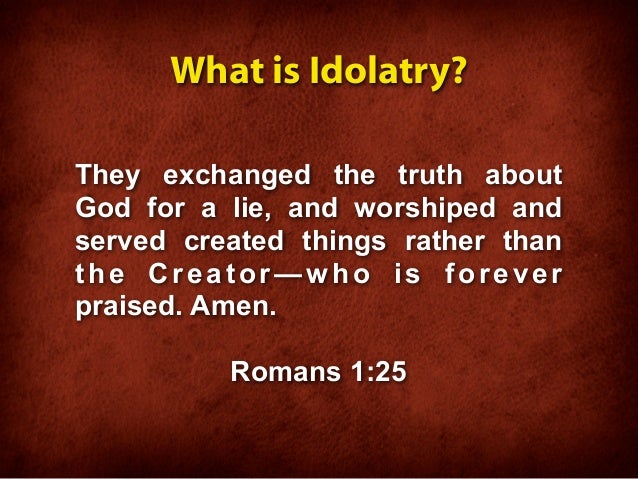 From idolatry to immorality is just one short step. If man is his own god, then he can do whatever he pleases and fulfill his desires without fear of judgment.

The result of this self-deification was self-indulgence; and here Paul mentions a vile sin that was rampant in that day and has become increasingly prevalent in our own day; homosexuality. This sin is repeatedly condemned in Scripture. Paul characterizes it as “vile” and “unnatural,” as well as “against nature.” Not only were the men guilty, but “even the women.”

Because of their sin “God gave them up” which means that He allowed them to go on in their sins and reap the sad consequences. They received “in their own persons the due penalty of their error” (Rom. 1:27, NASB). This is the meaning of Romans 1:18, “The wrath of God is being revealed from heaven” (literal translation). God revealed His wrath, not by sending fire from heaven, but by abandoning sinful men to their lustful ways. But there was one more stage.

Therefore, God gave them up in the lusts of their hearts to impurity, to the dishonoring of their bodies among themselves, because they exchanged the truth about God for a lie and worshiped and served the creature rather than the Creator, who is blessed forever! Amen.

For this reason, God gave them up to dishonorable passions. For their women exchanged natural relations for those that are contrary to nature; and the men likewise gave up natural relations with women and were consumed with passion for one another, men committing shameless acts with men and receiving in themselves the due penalty for their error.

4 thoughts on “Does idolatry lead to other sinful behavior?”