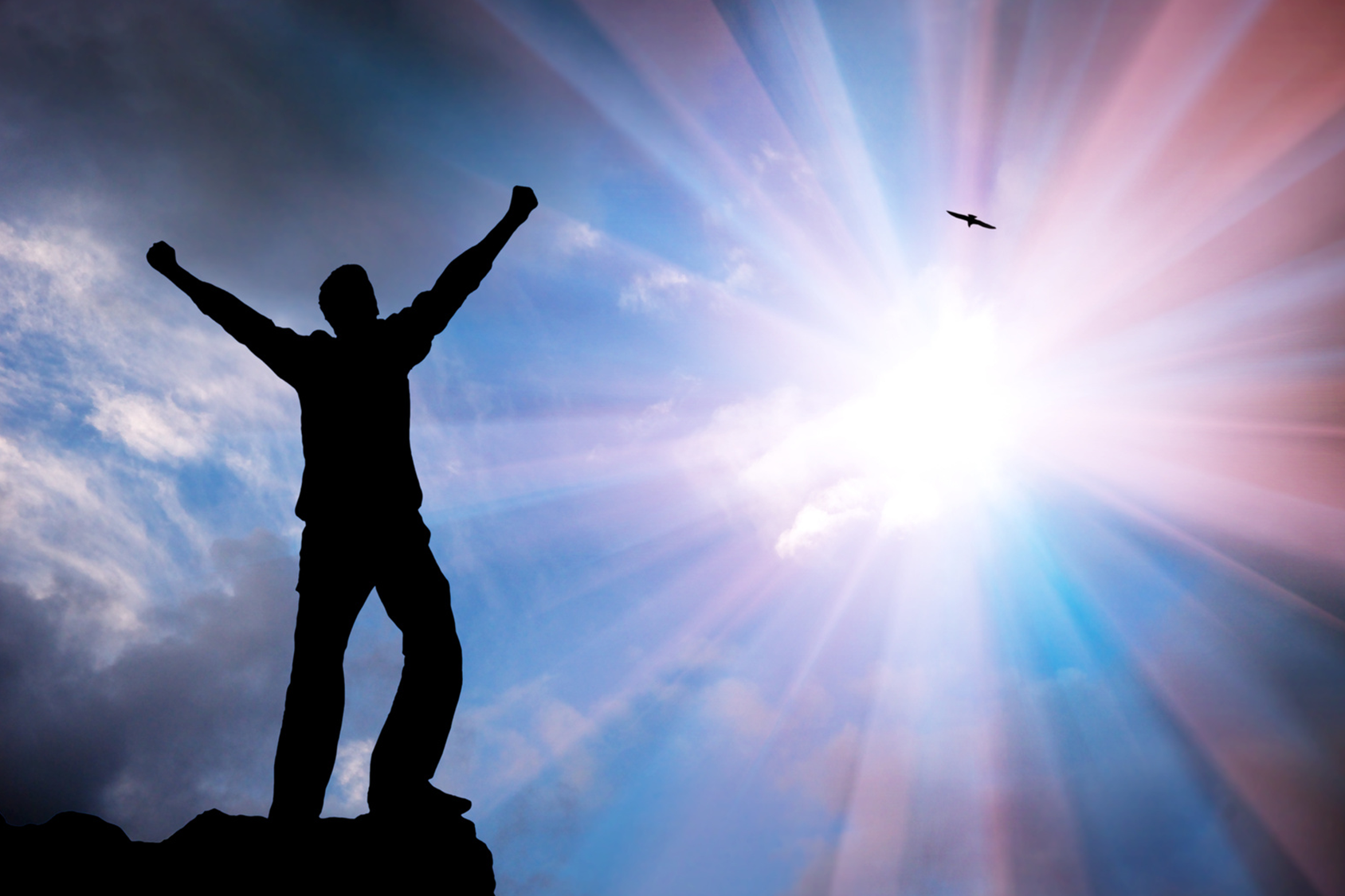 Now is my soul troubled. And what shall I say? ‘Father, save me from this hour’? But for this purpose I have come to this hour. Father, glorify your name.” Then a voice came from heaven: “I have glorified it, and I will glorify it again.”[1]

Why this is important: Jesus was on a mission. It would be a painful and horrible death. Jesus knew what would happen. Jesus was going to see it through all the way to the end. God had given Jesus a goal.

Jesus was joyful for what God was going to do through him. Jesus asked to go through the pain and suffering for our salvation. Jesus was intent. Jesus accomplished the mission God had sent him on.

God is God and God has the final word. God has glorified Jesus through his obedient act of sacrifice. God raised him from the dead and Jesus, living eternally, now sits at God’s right hand.

Digging Deeper – What is the glory of God?

If you want to dig deeper, here are some additional resources. The glory of God is the beauty of His spirit. It is not an aesthetic beauty or a material beauty, but it is the beauty that emanates from His character, from all that He is.

In one sense of the word glory it simply means “honor” or “excellent reputation.” This is the meaning of the term in Isaiah 43:7, where God speaks of his children, “whom I created for my glory,” or Romans 3:23, which says that all “have sinned and fall short of the glory of God.” It also has that meaning in John 17:5, where Jesus speaks to the Father of “the glory that I had with you before the world existed,” and in Hebrews 1:3, which says that the Son “is the radiance of the glory of God.” In this sense, the glory of God is not exactly an attribute of his being but rather describes the superlative honor that should be given to God by everything in the universe (including, in Heb. 1:3 and John 17:5, the honor that is shared among the members of the Trinity). But that is not the sense of the word glory that we are concerned with in this section.

In another sense, God’s “glory” means the bright light that surrounds God’s presence. Since God is spirit, not energy or matter, this visible light is not part of God’s being but is something that was created. We may define it as follows: God’s glory is the created brightness that surrounds God’s revelation of himself.

This “attribute” of God is really not an attribute of God in the sense that the others were, for here we are speaking not of God’s character but of the created light or brilliance that surrounds God as he manifests himself in his creation. God’s glory in this sense is not actually an attribute of God in himself. Nevertheless, God’s glory is something that belongs to him alone and is the appropriate outward expression of his own excellence. It seems right therefore to treat it here immediately after the attributes of God.[2]

The Glory of God. The glory of God can be described in two senses: (1) as a general category or attribute, and (2) as a specific category referring to particular historical manifestations of his presence.

As an Attribute. God’s glory refers primarily to his majestic beauty and splendor and the recognition of it by mankind; however, it is also an ethical concept and embraces his holiness, for to sin is to fall short of the glory of God (Rom 3:23). The Scriptures record praise to his glorious name (Neh 9:5), describe him as the glorious Father (Eph 1:17) and the King of glory (Ps 24); he is exalted above the heavens and his glory is over all the earth (Pss 57:5, 11; 108:5; 113:4). He is the God of glory that appeared to the patriarchs (Acts 7:2). He is jealous to maintain his glory and unwilling that it be given to another (Is 42:8); he acts to bring glory to himself (Ps 79:9; Is 48:11).

The word “glory” is derived from a Hebrew root that may mean “heavy,” “weighty,” or “numerous, severe” in a physical sense (that is, severe famine, Gen. 12:10; heavy yoke, 1 Kgs. 12:4). The related term kabod expresses the attribute of “glory,” “honor,” “splendor” as a derived meaning of the primary idea of weightiness or gravity (for example, Num. 24:11; Job 19:9; Prov. 3:16, 35). In the Old Testament, glory may be applied to a finely crafted object in the sense of cleverness of design, intricacy of artistic work, and beauty (Exod. 28:40). When applied to human beings, glory signifies dignity or respect as a characteristic of inherited status (Ps. 8:5) or honor due to one’s achieved status (Gen. 45:13). Glory is supremely ascribed to God as an attribute or possession, especially in the Psalms and prophetic literature (see Ps. 29:1–3; Isa. 6:3; Ezek. 3:12). God’s glory is manifested especially in his moral perfection or holiness and his unrivaled power or omnipotence (Ps. 96:7–9).

The glory of God is frequently associated with His presence—especially His presence at the covenant ceremony at Mount Sinai (Exod. 24:16). Often a cloud was the tangible symbol of God’s presence, shrouding the brilliance of His glory (Deut. 5:24; 2 Chr. 5:13; 7:1). God’s glory is so dazzling people are permitted to experience it only indirectly (Exod. 33:18–23). Furthermore, His glory is so effulgent that it may be imparted to objects and persons that come in contact with God’s radiant presence (compare Exod. 34:33–35). God’s glory is displayed publicly in His work of creation (Ps. 19:1) and is manifest to the nations in His sovereign control of history (compare Ps. 145:10–12).[5]

As applied to God.—Closely related to this usage is the employment of the word to ascribe honor and praise to God; see Lk 17:18, where only the stranger returned to give glory to God; or Jn 9:24, where the man who had been born blind is bidden to give glory to God; or the phrase “to the glory of God” in Rom 15:7, where the meaning is to secure the honor and praise of God among men. Similar is the use in the frequently recurring doxologies such as, “Glory to God in the highest,” “to him,” that is, to God, “be glory,” etc.

While the foregoing meanings are frequently illustrated in the NT, it is undoubtedly true that the characteristic use of the word doxa in the NT is in the sense of brightness, brilliance, splendor; and first of all, in the literal sense, referring to the brightness of the heavenly bodies, as in 1 Cor 15:40f, or to the supernatural brightness which overcame Saul of Tarsus on the road to Damascus (Acts 22:11).[6]

All the earth shall be filled with the glory of the Lord. Numbers 14:21 NRSV

In the year that King Uzziah died I saw the Lord sitting upon a throne, high and lifted up; and the train of his robe filled the temple. Above him stood the seraphim. Each had six wings: with two he covered his face, and with two he covered his feet, and with two he flew. And one called to another and said: “Holy, holy, holy is the Lord of hosts; the whole earth is full of his glory!” And the foundations of the thresholds shook at the voice of him who called, and the house was filled with smoke. And I said: “Woe is me! For I am lost; for I am a man of unclean lips, and I dwell in the midst of a people of unclean lips; for my eyes have seen the King, the Lord of hosts!” Isaiah 6:1–5 ESV

I reckon that the sufferings of this present time are not worthy to be compared with the glory which shall be revealed in us. Romans 8:18 KJV

He [God’s Son] is the radiance of God’s glory, the stamp of God’s very being, and he sustains the universe by his word of power. Hebrews 1:3 REB

Provided that God be glorified, we must not care by whom. St Francis de Sales

The paths of glory lead but to the grave. Thomas Gray

The glory of God is man fully alive. St Irenaeus

Short is the glory that is given and taken by men; and sorrow followeth ever the glory of this world … But true glory and holy joy is to glory in Thee and not in one’s self; to rejoice in Thy name, and not to be delighted in one’s own virtue, nor in any creature, save only for Thy sake. Thomas à Kempis

By faith we know his existence; in glory we shall know his nature. Blaise Pascal

The cross of Christ is Christ’s glory. Man seeks to win his glory by the sacrifice of others—Christ by the sacrifice of himself. Men seek to get crowns of gold—he sought a crown of thorns. Men think that glory lies in being exalted over others—Christ thought that his glory did lie in becoming “a worm and no man”, a scoff and reproach among all that beheld him. He stooped when he conquered; and he counted that the glory lay as much in the stooping as in the conquest. Charles Haddon Spurgeon

We must not reject man in favor of God, nor reject God in favor of man, for the glory of God is man alive, supremely in Christ. Leon Joseph Suenens

Our great honor lies in being just what Jesus was and is. To be accepted by those who accept him, rejected by all who reject him, loved by those who love him and hated by everyone who hates him. What greater glory could come to any man? Aiden Wilson (A.W.) Tozer[7]

4 thoughts on ““I have glorified it, and I will glorify it again.” ~God to Jesus”